Just added to your cart

I'm exhausted! This focusing thing is going to kill me, but I'm determined! I swear it's the audiobook! I finished the novel I was reading and moved onto the last audiobook on my shelf. I'm going to have to find another one soon. The book is non-fiction called Salt, Sugar, Fat. It's about how the food industry has engineered food to make us crave more of the bad stuff and how they target their advertising, etc. to make us want more!

Oh - I'm totally aware of it all but it's very interesting to "read" the story of the cereal companies and the soda pop companies. It's actually shocking how the FDA has tried to make the companies more responsible in light of the obesity issue, but it boils down to money. The food companies are big and all they care about is the bottom line. I truly believe that the root of so many evils is that darn bottom line.

We have this discussion at home often. The argument is that it's a free country and people don't have to buy these bad products. Yes - I get that. But they are conditioned from babies - watching the commercials on TV, wanting those incentives in the cereal boxes or whatever. Then it becomes an ingrained habit that is extremely challenging to say no to. To the extent that people end up eating the bad stuff, not because they are hungry, but the food substitutes for friends, loneliness, boredom, etc.

The worst is soda pop. I can't believe that the AVERAGE consumption rate of pop is GALLONS per year - something like 50 gallons, although that number has decreased. But still - don't drink it - just don't. It's so bad for you, even the diet stuff. It's just evil - the worst thing ever made.

Anyway - it's an interesting read. Thanks to Nancy for the recommendation.

Here are my neighborhood pictures.

Oops - this is what happens when you think that snowman is such a great idea and it's November. But what do you do with him when it's April?? It doesn't look like an inflatable one. This is a townhouse so not a lot of storage. Oh well - Frosty will be waving all year long I think.

My local grocery store must have started limiting the number of people in the store. On the last three mornings, I've noticed a physical distancing line outside the store. It looks like the people are closer together, but that is their shadows!!! The picture was taken shortly after 8 AM when the store opens and every morning it's like this. I wonder if that line exists all day?


Life is sure different. There's no question of that. I know my city is patrolling this weekend for people gathering and I see the police almost every afternoon on my walk. But since I'm just gathering with my girls, we are OK.

Hey - I've got some show and tell from the others today.

Tish was working on this wool applique project. I love it - the car is adorable and the snowflakes are very cute. I think it's going to be a wall hanging.

Then she got started on the next project.

Here are some of the components for the new quilt. I love the color of those fabrics!!!!

Susan was working on an Easter table runner. It's adorable!!

Katheleen was working on the Martha Washington blocks for Snow Days.


Paula was busy painting a cabinet in her new sewing room. I guess that counts as retreat work, but I bet it was tough to get that in the car!!!!


And this is another of the cabinets in her new room. I can't wait to see the room when it's done!!  Look at the hardware in that room - the doors. She lives in a beautiful old house.


Ronda was working on this blue and white quilt. YIKES -- essentially, that's just adding borders upon borders. A LOT of work. I heard that she's pinning every row to make it lie flat. Good job Ronda!!!!


Me? Oh - I was a busy little bee. I think I've carried this darn quilt to many retreats. This one is on my Dirty Dozen (UFO) list for 2019. Hey - did you notice that I'm working on those UFOs?? Oh yes - these focused days are GREAT and I just need a few more of them and I'm going to get those lists done!!!

This quilt is called Easy Street by Bonnie Hunter. It was her 2012 mystery quilt. Loads of little pieces. I've worked on three of her mysteries. One is completely done and waiting to be quilted. There's this one and one more that I need to work on at some point. While I enjoyed them, I won't do another one. Too much work for a mystery quilt and too many other quilts to make.

The quilt is on point and the four corner triangles were made, as well as four (of 25) blocks. This is what it looked like on the design wall the night before. 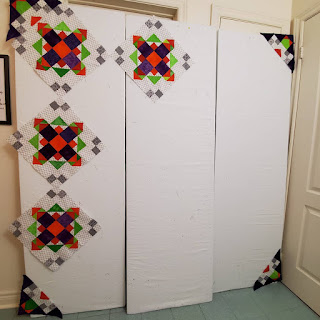 I needed to make 16 of these blocks (they are 15"). Four blocks were made. Some of the components of the remaining 12 blocks were made. Note they got laid out on my foam core boards which were the perfect size and happen to be stored in Studio U.

I needed to make nine of these blocks. The components were made, but still in 25 separate little bits for each block.


12 setting triangles needed to be made. I found them in a plastic bag like this.

So I started by organizing them to look like this.


See that blue board? That's been tied up for years with this project.


Not that I was absolutely missing it since I do have two. I love it so much that when I found another one on sale somewhere (actually, I think it was at Fabricland) at one of our retreats a few years ago, I snatched it up.

I did have to cut a few additional squares of purple. I guess I can count pieced components, but not squares. No worries as all the fabric for the quilt are still in the project box. That project box took up a LOT of space in the laundry basket as well.

It's the last day of the retreat and I haven't touched the yoga bag, the backpack, nothing in the panic packed bag (there were three projects in there) and there's one more small project that I haven't touched. I may get to one more project later today. We'll see. So YES - I can survive with a laundry basket of stuff for the next retreat.

I started off by making the setting triangles. This is going to be bright, but it looks awesome. Did I mention that all the seams are twirled on the back? Whose bright idea was that?

All the setting triangles are made and need to be pressed.

Then I worked on that first block and soon (yeah right) I had the setting triangles, the corner triangles and those 16 blocks on the design wall.

Then it was onto that last block. I started off by sewing the blocks into rows. Notice they are not pressed yet.

I was so close to finishing all the blocks when two things happened. One, I sewed a couple of those rows (OK - six of the stupid things) together incorrectly and they had to be ripped out. Then my sixth bobbin ran out. CRAP!!!!

Instead of cleaning the machine and inserting a new needle, I wound another bobbin and finished the blocks.

And here it is. All the blocks and setting triangles are DONE.


All that remains today is to sew all the blocks and setting triangles together. Then I can decide on a border from the fabrics in the project box. Oh my god - this is eight years old, but guess what? It's going to be done today and I'll get to cross it off the list for 2019. I'm staying at the retreat until it's done. I don't care if Emma comes to kick me out!!!

On that note, I'd better get myself organized. I'm working on the Celebration homework assignment which will be sent out later tonight. Maybe even this morning, I'm almost done. I think they are going to love what I did with the quilt. I'll show you at some point.

Ciao!!!
Back to News
Use left/right arrows to navigate the slideshow or swipe left/right if using a mobile device