Just added to your cart

These Two New Smart Bassinets Will Rock Your World

In Finland, new moms are famously given a recycled cardboard box that serves as a bassinet. Now, granted, those arent recommended in this country, because theyre not regulated. So American parents who covet an infant sleeper with Tesla-like features can choose between two new bassinets promising the holy grail of parenthood: A good night of sleep.

In the good old days, abedside bassinet used to just mean a basic sleeping spot that would fit nicely in the master bedroom and keep your baby close by. Then the insanely fancy Snoo roared into town.For the mind-boggling price of $1,295 (you read that right), exhausted parents (by definition all new parents) could get a smartphone-controlled bassinet that would, ideally, soothe baby back to sleep, even choosing the white-noise sound and motion for you. But this is a piece of baby gear that can only be used until around six months of age (or 25 pounds), and even the Snoos rental option of $112 per month can feel prohibitive.

All snark aside, regardless of how high-end you want to go, a portable bassinet or play yard is a good thing to have, since the American Academy of Pediatrics recommends babies ideally room-share with their parents until age one, or at least six months.

Now, two other popular baby-gear brands4Moms, known for their gently undulating infant swings, and Halo, maker of those adorable sleep sackshave come out with their own new bedside bassinets. Both cost less than $350, so you can put some extra cash towards your babys college fund. Heres a look at how they measure up.

This easy-on-the-eyes bassinet has five motions to soothe your kid.

This smartphone-controlled bedside bassinet costs $329, has five distinctive motions and will be available in early February 2020. Theres a timer on it as well as five elliptical-like motions: Car ride, rock-a-bye, free swing, kangaroo and wave. Most are designed to mimic a parents natural movements.

Parents can choose among five speeds and theres also a vibrating option.The four white-noise sound choices include fan, rain, ocean and shhh. Getting. Tired. Already.Its Bluetooth-enabled and can be controlled either from your smartphone or the touchscreen on the bassinet. You can mix and match the movements, speeds and sounds to figure out your babys perfect soothing formula, which may change over time. (Think of it as mixing a cocktailminus the booze.)

It has mesh sides to allow air to circulate and a firm surface (both of these are in line with the American Academy of Pediatrics recommendations for a safe sleeping spot that may help protect against SIDS).The mattress is water-resistant and a machine-washable sheet is included.The height is adjustable, and a lower storage basket can be purchased separately.The bassinet can be used from birth until baby is 25 pounds or can push up on hands and knees. 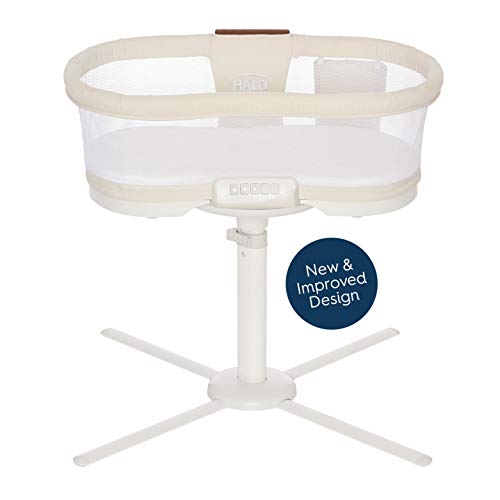 You can't control it from your phone, but it does have a handy swivel feature and lowering wall that makes it easy to tend to baby while you're still lying downa win-win for tired parents.

Using this bassinet is a bit like co-sleeping, but with the baby in his own safe space. Its not as high-tech as the 4Moms or the Snoo, but its flexible configuration may win you over.

It comes with a newborn insert (for babies up to 15 pounds) that provides a more cozy fit.It has a handy 360-degree swivel, so its easy to get out of bed. The side wall lowers, so you can feed or soothe baby from the comfort of bedyoull especially appreciate this if youre breastfeeding, recovering from a Caesarean birth or both.The small footprintwith two legs that can tuck below most bed frames, allowing the bassinet to overlap the mattressis ideal for tight spaces. And the entire base can be folded and stored under most beds when youre not using it.

There are two vibrating speeds and two amber nightlights (one aimed at the floor, for midnight diaper changes), as well as a timer and four soothing sounds (a mix of nature, womb-like and music).The bassinet comes off and can be used on or off its base, so you can take it with you from room to room during the day.

Like the 4Moms and the Snoo, the Halo Bassinest has mesh sides that allow air to circulate, and the sleeping surface is firm.The mattress is waterproof and a machine-washable sheet is included.The height is adjustable, and the bassinet comes with a removable storage caddy.The bassinet can be used from birth until baby is 20 pounds (around five months), can roll over or has the ability to push up on hands and knees.

Every product on Fatherly is independently selected by our editors, writers, and experts. If you click a link on our site and buy something, we may earn an affiliate commission.

The post These Two New Smart Bassinets Will Rock Your World appeared first on Fatherly.